Progress with the Neutering Project! 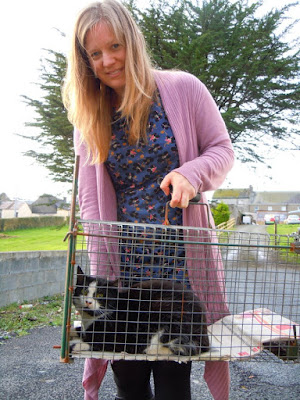 Just yesterday this handsome tom cat was released back into its territory. It was very relieved to get back home! He was neutered, wormed and had his ears cleaned and now will live out his life without having to fight for females. We have talked to a lot of locals who feed the cats. I can't but help feel wouldn't it be nice if we could tame them and have them in a big cat sanctuary where they all lived happily ever after and even found homes all to themselves if they got sufficiently friendly with people. What is the best for them? Here is one such sanctuary on the Isle of Mann and have a look at their webcams. What a wonderful place! http://www.manncat.com/

So it's Patrick's Day and the whole of Ireland is celebrating and half the world too. Hope you all have a great day with your families. The sun is just peeping out now but did hear about some hailstones in Cork! Oh dear.

Plans are afoot in Mollie Cares for more projects and fundraising activities. There are still lots more cats to neuter and I have just heard from a woman who came into the library about another colony of cats that live near her. She feeds them and volunteered to let us trap and neuter them and to bake cakes for any coffee morning or cake sale we might have. How generous and thoughtful people are. So we are still looking for funds and if you have anything to spare please donate with our paypal link above. It's 30 euros to neuter a male and forty for a female. Mollie has alot of friends on facebook and if everyone gave 2 euros we would be well on the way to getting all those cats neutered. Thanks so much everyone xx
Posted by sam at 7:22 AM 0 comments

Off to the animal sanctuary and Away with the Birds 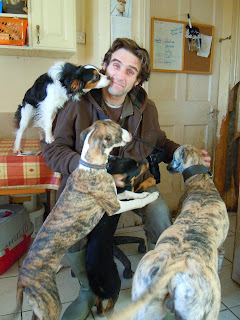 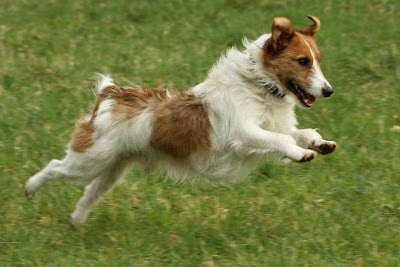 Here is one of the female cats we managed to trap and take to the vet in Ennis to get spayed. This is her arriving back in Scariff after staying over in the vets to recover. The vet gives them a long-acting antibiotic to cover them for two weeks after the operation.

Last week we went to the GSPCA sanctuary to continue our volunteer work which involves photographing the dogs there to improve their chances of being rehomed. It seems to work as staff have told us that dogs have found a forever home as a direct result of getting a good photo up on facebook. Hurray! We had a great day and Mollie and Maddie got a walk around the grounds. We brought the dogs out in twos and sometime fours (with the smallies!) for a run in the field and took action shots and then some portraits to see their beautiful faces. I do hope they all get loving homes soon. I've been saying to Jamie that we need to photograph the cats soon too as a lot of the black ones seem to be overlooked. Personally I love a nice sleek black cat! I have one and she's black as the night and so shiny and nice to stroke and ridiculously friendly too.

We've just got back from three days at the BirdWatch Ireland All Ireland Conference which was so interesting. It's such a great charity and I really enjoy volunteering with them and Mollie often volunteers at stalls and attracts lots of attention and helps recruit new members too! The highlight was meeting a little boy called Oliver with his bird notebook. Start them young! Birdwatching is such a great hobby for children and gets them out in nature. Here's the birdwatch website where you can join http://www.birdwatchireland.ie/ 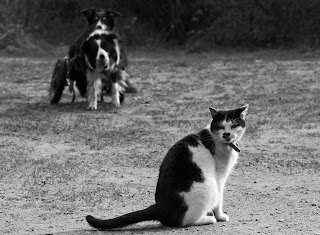 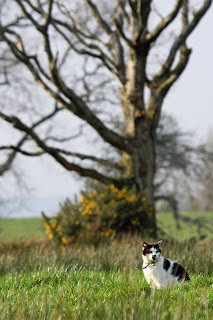 Well, how exciting it all is. I'm amazed at how generous people are and in only three days we have enough to spay three cats. That's fantastic news. We've already paid for two so there's enough to pay the bill for the next one which is great. But I can't stop there as there are lots more cats to spay and some with cat flu. We hope to worm and deflea also if needed.

Luckily there are a few places in town that feed this colony so that is not so much a problem but we will be monitoring them and making sure the ones we trap are well-fed and in good condition. I thought of a good idea that maybe people would like to sponsor the spay of a female cat so they know what exactly that amount of money is doing.

Today I'm relaxing at home after a week of work and busy evenings. I joined a natural cosmetic making class with a really interesting and fun herbalist. Here's here brand new website http://www.empresscosmetics.com/ You could nearly eat the products they are so pure and natural. I'm hoping to make some lovely lip balm and moisturisers soon as I bought raw materials at the class. Pilates is on Monday and our astrology group met on Tuesday so now it's time just to chill out with Mollie, Maddie and all the cats.

Jamie went on a big walk yesterday with the dogs and PBoy went too and he got some endearing photos of my lovely puss following the dogs and miaowing for help at the muddy bits. He's normally so quiet you'd hardly think he was there so he's coming out of his shell at last!! He started out life as a stray kitten. I went for petrol one day and heard a plaintive kitten miaow and went in search of the source and saw a teeny black and white kitten at the back of the garage. On asking in the shop about it I was told it had been crying out there for a few days and noone had even fed it. Brought him home and popped him in a box with some younger kittens in the bedroom. The mother came back and didn't even blink an eye at the cuckoo among her babies. She looked after him as if he were her own and he went on to be her favourite kitten!

So all in all a great week of new beginnings supported by such kind-hearted people from all over the world. Time to go and clean out the car, it's like my second house there's so much stuff in there!
Posted by sam at 8:16 AM 0 comments 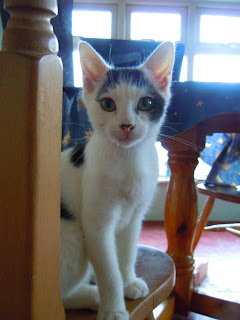 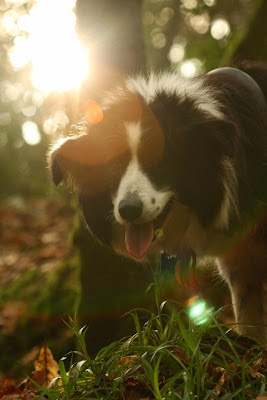 Well, it's been a while since I posted anything. But I've big news so had to tell the world - Mollie now has a charity in her name called Mollie Cares. It's all official. We have a bank account and all a 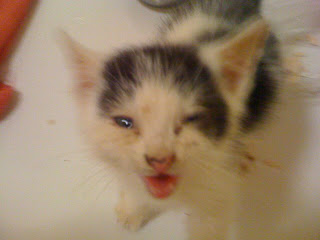 nd our first project is underway. All along since Mollie's first found fame and all the attention she gets wherever she goes I have always thought that she would be a great figurehead for some type of charity.

I also always believed that something good and wonderful should come out of her tragedy and all the sadness because she is so happy still and has taught me so much about postivity and how to embrace life. So it happened that late last year I met a lovely woman who had picked up a sickly kitten near the library where I work and who had come in to ask the cat lady(me!) if she knew about all these feral cats in town. Another kind soul I know from coming to the library also picked up a kitten from the road which was about to be run over and rehomed it. Both these kittens were saved from a life on the streets exposed to disease and all weathers. I got talking with the lady called Catherine and I said we should set up a local animal welfare group and she came back in the new year and we did it. Just like that!

Above is a picture of Timmy just after being rescued. He was taken to the local vets where they said he should be put down but his rescuer opted to get him medicine and nursed him back to health and look at him now (photo next to Mollie)!

Time to start fundraising.. If you would like to make a small contribution to help pay for neutering there is a paypal link on this blog. Anything will help even a euro. I am looking forward to lots of great fundraising events and ideas and am so proud of Mollie for being the dog she is and how she inspires people and lifts their spirits. Go Mollie!!

So here we are now starting our first campaign. Small steps. There are lots of stray cats in the town that will continue to increase in numbers and continue to be sick and spread disease and be cold and hungry if someone doesn't do something. That's where Mollie Cares can help. With funding we can afford to trap neuter return these cats to at least stop them breeding and eventually the numbers will fall. If we find kittens young enough we will try to tame then and rehome them. 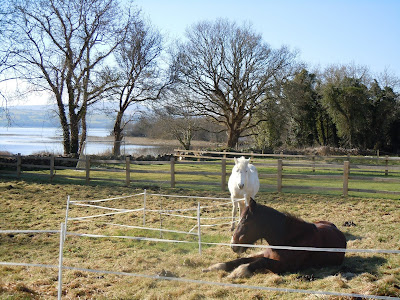 We had some unsual neighbours for a couple of weeks. It was lovely to hear them munching and to watch them peacefully standing around as horses do. The dogs didn't pay them any mind but the cats went over for a look every now and then. I think it was more jealousy though with Dudley as he didn't like me stroking the horses too much and came over to tell me!
Posted by sam at 8:34 AM 0 comments 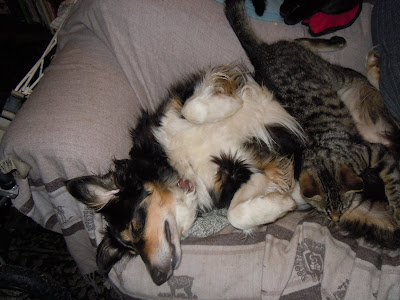 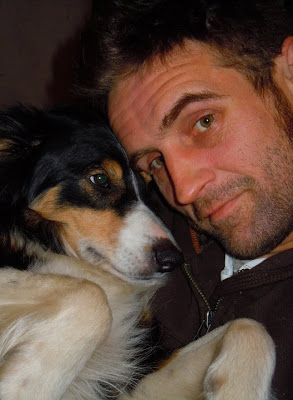 Maddie beautifully demonstrating her affectionate nature. She is the most cuddly dog I've ever encountered and I've met a few! Her belly has been the soft bed of many a kitten and puppy. Perhaps my habit of sitting her on my lap belly up to calm her as a wriggly wild pup has helped to create this cuddle monster. I think I read it in a dog training book from the library and it worked a treat. It never fails to lull her to sleep with a little stroking of the belly.
Posted by sam at 4:50 AM 0 comments 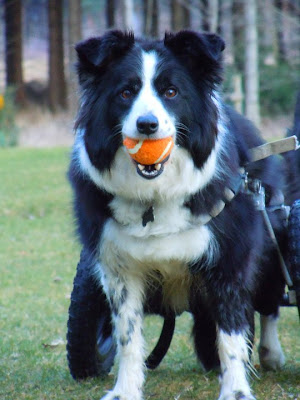 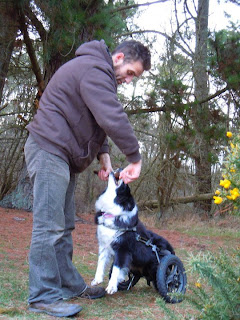 Spring is surely here now and yellow flowers abound. It's so nice to go for a walk now with the dogs and not to have to worry about wrapping up so much and the fear of it getting dark really quickly. We love going to Portumna forest park where there are so many places to explore and great green areas to play frisbee or fetch and most importantly there is an endless supply of sticks. Our girls are easily pleased!

Jamie bought a new ball thrower which is so cool as it throws the ball a long way off which tires them out quicker. The orange ball didn't last long though so we're using the sturdy kong tennis ball now. Maddie lost one the other day when it ricocheted off her nose into aninpenetrable thorny thicket. Try saying that fast!!